The 2017/18 season is nearly upon us, and there are some exciting Goldline Scottish Curling Tour developments!

This week will see the launch of the new website!

As soon as the new site is live, information on how to access it will be posted both here and on the Facebook group!

This season will also see a brand new event added to the tour! In the mean time, head over to http://www.curlbraehead.co.uk/entry-information.html and get yourself entered into the first event of the season, the Braehead Open. It's one of the most popular events on the tour; it's open to everyone and has lots of great prizes in a number of categories, as well as the opportunity to get some early points on the SCT Leaderboard.

More news to follow later in the week.
Posted by Jayne Stirling at 18:30 No comments: 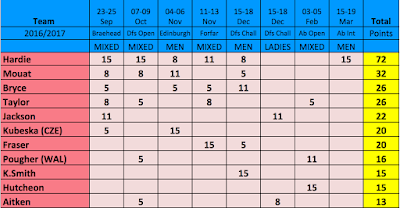 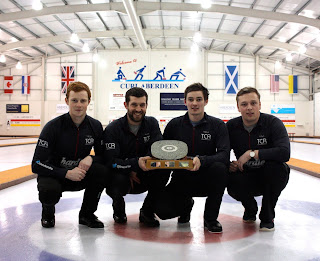 Grant Hardie and his rink of Blair Fraser, Duncan Menzies and David Reid have cemented their place at the top of the Goldline Scottish Curling Tour Leaderboard with a win over Team Liu of China in the final of the Aberdeen International.

Hardie opened with one in the first end, to which Liu replied with one in the second. Capitalising on the last stone advantage by scoring 2 in ends three and five, while Team China could only manage to score a single point in end 4. Ends 6 and 7 were blanked, and then the Chinese were run out of stones in end 8.

Thanks were given to the ice staff, Curl Aberdeen staff, competitors and spectators; the great support for the final was noted.

This draws the Goldline Scottish Curling Tour to a close for this season - look out for the final leaderboard update soon!
Posted by Jayne Stirling at 17:34 No comments:

Semi-Final Report and Final Line Up

In the first semi final, Hardie came up against hot favourites McEwen, and opened with a steal of 1. Some excellent shot making from both teams made for an excellent game, but Team Hardie's accuracy meant they booked a place in the final!

Chinese side Liu took on Swiss side Schwaller in the other semi final. singles were exchanged at the start of the game, but Liu and his team manufactured some multiple scores later on, and it will be them who face Hardie in the final.

Hardie v Liu is now underway, and Hardie has opened with a score of 1 in the first end, after covering the pin with his last stone draw before the game.

Great atmosphere in the rink this afternoon, well worth popping in!
Posted by Jayne Stirling at 15:24 No comments:

Kauste held A side qualifiers McEwen to a close game, but a score of 4 in the seventh end secured a semi final place for the Canadians. They are up against Team Hardie who defeated Deruelle in a convincing fashion in their quarter final.

The Chinese side defeated Eskilsson 7-2 after six ends, and they face Schwaller in the semi final. A steal of 2 in end five was key to the Swiss team prevailing over current Scottish Champions Team Murdoch.

Semi Final matches (McEwen/Hardie, Liu/Schwaller) got underway at 12pm, and the final will take place at 3pm. Spectators welcome (free of charge) at Curl Aberdeen, who have done a great job of hosting this event! Staff and volunteers are ensuring that the Championships runs smoothly.
Posted by Jayne Stirling at 12:39 No comments:

This evening, the four qualifiers from the C Event will be decided. The winners of the following matches will proceed to the quarter finals tomorrow morning.


Posted by Jayne Stirling at 20:02 No comments:

Moving into the third day of competition at Aberdeen, Teams McEwen and Murdoch have qualified for the playoffs through the A event.

In the B event, Deruelle has defeated Ulsrud, progressing to the B semi - final, with Ulsrud dropping the C event. Ramsfjell continues in the B road after victory over Team Hardie this morning.  Eskilsson defeated young Scottish Team Bryce, and Kauste was victorious over Stjerne.

Eskilsson defeated Kauste to gain their playoff place for Sunday, and Deruelle were victorious over Ramsfjell to join them in the playoffs.

The C event semi finals are at 4.30pm this afternoon, with the finals at 7.30pm. There will be four qualifiers from the C road.

Pop into Curl Aberdeen this evening or tomorrow to watch some world class curlers in action here in Scotland! Admission is free.

Posted by Jayne Stirling at 17:34 No comments:

After a busy day of play at the Aberdeen International, the last few games of the day are coming to a close.

This evening's session saw McEwen (Canada) victorious over Stjerne (Denmark) in the A event, meaning they have qualified for the quarter finals. Ulsrud (Norway) is up against Murdoch (Scotland) to secure their playoff place; it is currently 5-5 after 6 ends, with the Norwegians playing with hammer.

In the B event this evening,  Tom Brewster's home team is playing Canadian visitors Deruelle. That game stands at 6-3 to the visitors after 6 ends. Brewster has hammer. The other B event game sees fellow Scots Mouat 4-2 down against Kauste (Finland), where Team Mouat are playing the 8th end with hammer.

Craik (Scotland) lost out to Shuster (USA) in the C event, meaning that they have been knocked out of the event, but the young team have put in some great performances against world class teams over the past couple of days. Italian team Retornaz defeated Baumann (Germany) in their evening's other C event match up.

After a draw to the 4ft for a score of 1, Deruelle have defeated Team Brewster.

Team Kauste proceed in the B event after defeating Team Mouat.

After an extra end, Murdoch makes an open hit with his last stone to defeat Ulsrud. The Scots played a solid loooooooong game and it was a classic Ulsrud/Muddy battle for the ages. [last end report by Svae of Team Ulsrud]


Posted by Jayne Stirling at 22:51 No comments:

The Aberdeen International Curling Championship will be hosted by Curl Aberdeen this weekend, this is the final chance for teams to win Goldline Scottish Curling Tour points for the season.

Twenty eight teams from around the world will contest the competition in a triple knockout for their share of the total prize pot of £13,900.

The draw can be found here, a triple knockout format, the first of its kind on the Goldline Scottish Curling Tour.

The first round of games starts today at 2.30pm, 4 seeded teams have a bye to the second round, these are Ulsrud (NOR), Murdoch (SCO), McEwen (CAN) & Smith (Sco)

Updates throughout the competition can be found on the Facebook page or the Aberdeen International Curling Blog.

Good luck to all those competing and we would encourage all in the nearby area to go along and support this World Class field.


With Wales dominating in the six nations rugby match airing in Curl Aberdeen; their curling compatriots took to the ice looking to emulate that performance.
However it was the locals who struck first with a two, Pougher then equalising in the 2nd drawing the button with his last. A great angled tap to the 4-foot from Angus Robertson in the 4th put Team Hutcheon back in front and then another two in the 5th followed a dip in form from the Welsh side. Hutcheon kept the pressure on and Pougher was forced to play a tricky raise double with his last in the 6th. It was played well but only managed to remove one opposition counter and a single was scored. Forced to gamble in the 7th, Pougher was a bit heavy with this last draw and gave Angus an opportunity for three which he took for a 9-3 lead and handshakes were offered.